Welcome to Portugal, the best hidden place in Europe 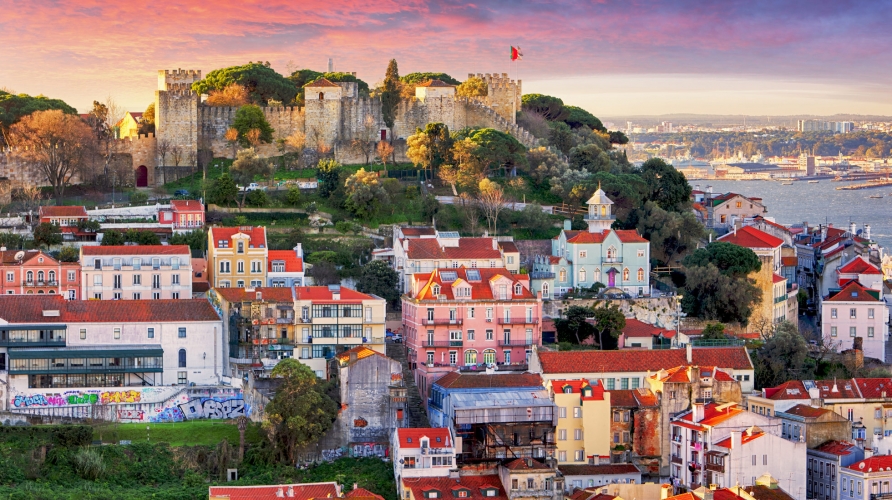 Portugal is the place where heritage blends with modernity, where the green lands blend with the blue of the Atlantic Ocean. That secret place where you will be able to truly connect with your inner self.

Pack your bags and brace yourself for a journey of a lifetime. What are you waiting for?

Over recent years, Portugal, a small country lying on the Atlantic Coast of the Iberian Peninsula, has become one of the most sought-after tourist destinations in the world. It is reasonable to wonder how the oldest nation-state in Europe was able to gain such momentum in such a short window of time. Maybe the answer lies in the fact that the country has something in store for everyone. Scenic beaches, a rich history, breathtaking countryside, vibrant cities, mysterious islands, unique gastronomy, safe environment, friendly inhabitants, among many other factors. Portugal is so unequivocally unique and diverse that it would take an extraordinary effort not to love it.

From urban and modern towns to rural and historical lands, there are 23 Classifications by Unesco in this country including monuments, landscapes, and intangible heritage. The Portuguese people have rich traditions in art, music, dance, and celebrations. This vast and unique culture took centuries to be built into what it is today.

Two landmark moments shaped the country´s cultural heritage. Firstly, the Moors Occupation, which started in the 700´s A.C, brought us a new phonetic, a new type of architecture, the famous Portuguese tile – Azulejo - and the basis for our traditional national music, the Fado. Secondly, the Maritime Expansion Era, which started in the 15 century, allowed us to borrow new customs from different cultures. Spices that transformed our gastronomy, migration of African people to our country, the introduction of new species of plants in our countryside, just to name a few.

Since most Portuguese people practice Roman Catholicism, celebrations have a religious purpose. The most famous festivities are the Patron´s Day celebrations of Lisbon and Porto, S. António, and S. João, accordingly.  People gather with friends and family in the city´s traditional neighborhoods and grill sardines on the streets, release paper balloons, and dance all night long. 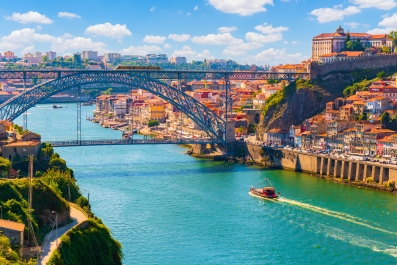 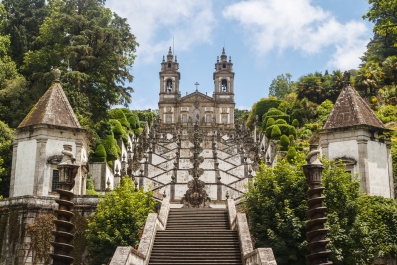 The Mediterranean Diet is acclaimed all over the world. This Sea which provides delicacies of fish and seafood that please even the most demanding stomachs. Far from the coastal regions, particularly in Northern regions, there is a big meat consumption tradition. Some of the country´s main dishes include Bacalhau, Cozido à Portuguesa, Francesinha, Marisco, among many others.

It is also important to stand out that Portugal is considered one of the most prominent wine destinations in the world. Port Wine, originally from the Douro Region in the North, is the landmark of wine production in Portugal. A visit to the Port Wine Cellars is a mandatory stop when visiting Oporto. 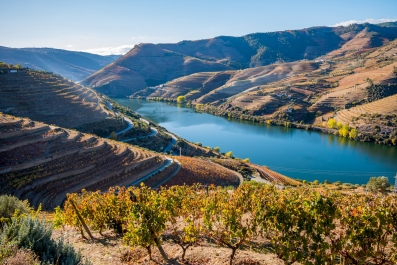 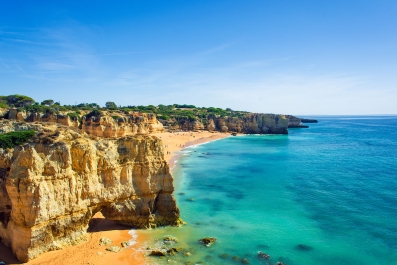 The Azores Islands rise from the depths of the Atlantic Ocean and lie on the nexus of the European, American, and African tectonic plates.  They are nine poetically-named islands with an untouchable scenery: sapphire blue and emerald green lakes, dormant volcanoes and craters, fumaroles, natural warm pools, colorful hydrangeas and azaleas, and UNESCO sites. They are also known as “The Green Islands” due to their intense vegetation, covering almost every inch of the landscapes. Some historians claim that the – immersed - lost city of Atlantis is located somewhere around these Islands.

The Archipelago of Madeira, an exuberant botanical garden of volcanic soil, comprises two inhabited islands and two uninhabited groups. With a stunning 99 miles of coastline, it’s characterized by a surrounding blue crystal clear sea, magnificent cliffs, natural pools carved out of lava rocks, waterfalls, and quiet valleys with rustic villages. Known worldwide as the “Islands of the eternal Spring”, here the mountains have breathtaking views and the trail paths through the Laurissilva Forest are globally appreciated. 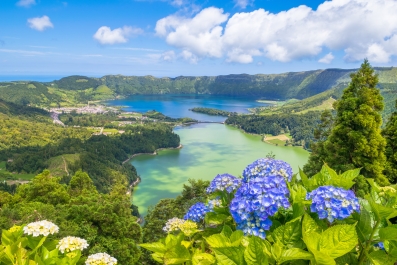 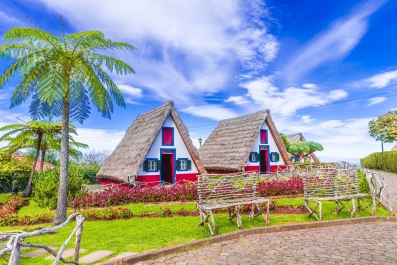 Portugal profits from the temperate Mediterranean weather. Making the country one of the warmest and sunniest in all of Europe.

Distinctive regions experience differences in climate depending on their geographical location. The southern region tends to be warm all year long. During the Summer season, from June to September, tourists from all over Europe choose to spend their vacations in Portugal. Therefore, these are the busiest months for traveling.

On the other hand, the northern area tends to be cooler, all year long, and with big periods of precipitation during winters. 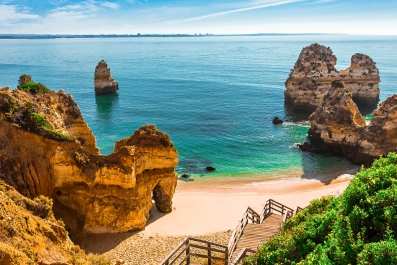 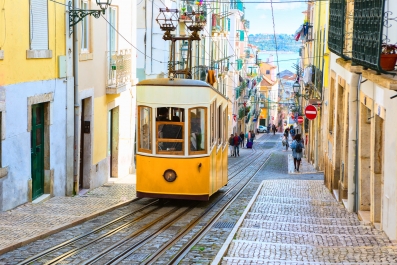 Portuguese is the 7th most spoken language in the world, with around 220 million native speakers. Portuguese is derived from ancient Latin, as well as Italian and Spanish, for example. As a result of colonization, in the 15th and 16th centuries, it started being spoken in all seven corners of the World. Portuguese can be found in Angola, Brazil, Cape Verde, Guinea Bissau, Mozambique, Sao Tome, and Principe, East Timor, Equatorial Guinea, and Macau.

When traveling in Portugal, it is not mandatory to be fluent in the native language. You will easily find locals who can communicate in English, Spanish, and French.

How to Get Around in Portugal

Despite being located in the extreme southwest of Europe, Portugal can be reached within 2 hours from all major European cities and just a few hours from the Americas. Five main airports are strategically spread throughout the country - Lisbon, Porto, Algarve, Azores, and Madeira - where low-cost and commercial airlines operate.

When it comes to traveling across the country, trains, buses, or cars, are the most viable options. CP (Comboios de Portugal) operates all trains in Portugal, covering the country from North to South, from Valença to Faro.

Since Portuguese highways are considered to be some of the best in Europe, traveling by road is no hassle. Bus companies connect almost all of the country’s towns and villages and, with a car, visitors can easily reach every sight in the country in a matter of a few hours.

In Portugal driving licenses from most countries are accepted, so there’s no need to get an international one. 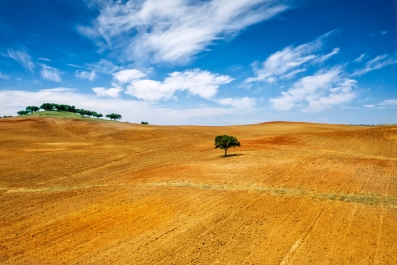 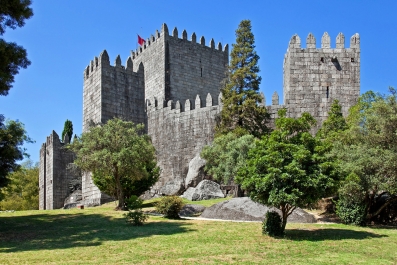 In 1986, Portugal joined the European Economic Community (EEC), now designated as the European Union (EU). Because of this alliance, the official currency in Portugal is the euro (€) since 2002.

For tourists, banks understandably, offer the best exchange rates. They are usually open from Monday to Friday, from 8:30 am to 3 p.m. Moreover, there is a wide network of ATMs all over major cities.

Portugal remains one of the EU’s least expensive destinations, without compromising safety and providing a tourism service of excellent quality. 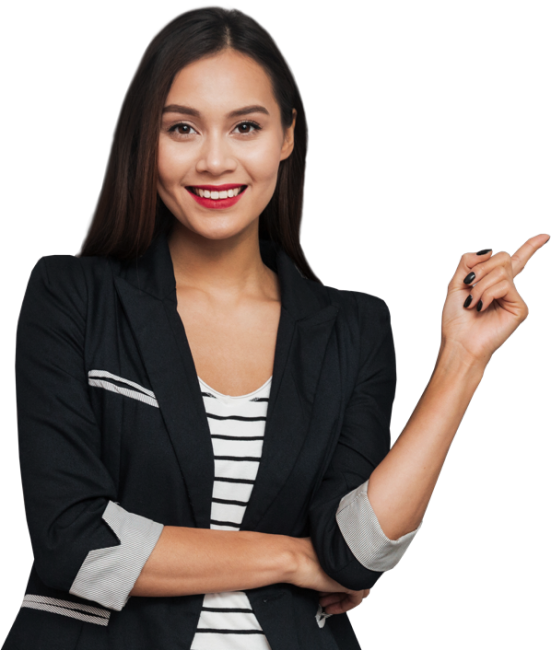 Don't see what you are looking for?

We design private tours and experiences tailored to your travel interests, schedule and budget. Talk to us.